The Heft & The Hirsel are two bespoke luxury glamping pods located on our family farm. Situated within Loch Lomond & The Trossachs National Park with panoramic views from their large private decks they offer a secluded and relaxing stay. Each pod has an en-suite shower room, double bed and double sofa bed. Whilst principally designed for two each pod can sleep up to four people. The pods have a hand made country style kitchenette featuring a Belfast sink, hob, microwave, plus TV, Wi-Fi and heating. The large decks double your living space allowing you to enjoy the outdoors at every opportunity. The decks feature a picnic table and there is an additional BBQ area to expand your cooking options. Barbeques are available as a booking extra.

The Heft & The Hirsel are identical, with subtle interior differences and spaced 20m apart providing plenty of privacy for guests in each pod. Equally it makes it the perfect space to share with family and friends and have the whole site to yourselves.

Breakfasts, dog bookings and BBQ’s are available as booking extras, which can be added to your booking after selecting the dates and number of guests for your stay. The Hirsel is our dog friendly pod where we welcome one well behaved dog per stay. Please read our T&C’s regarding dogs. 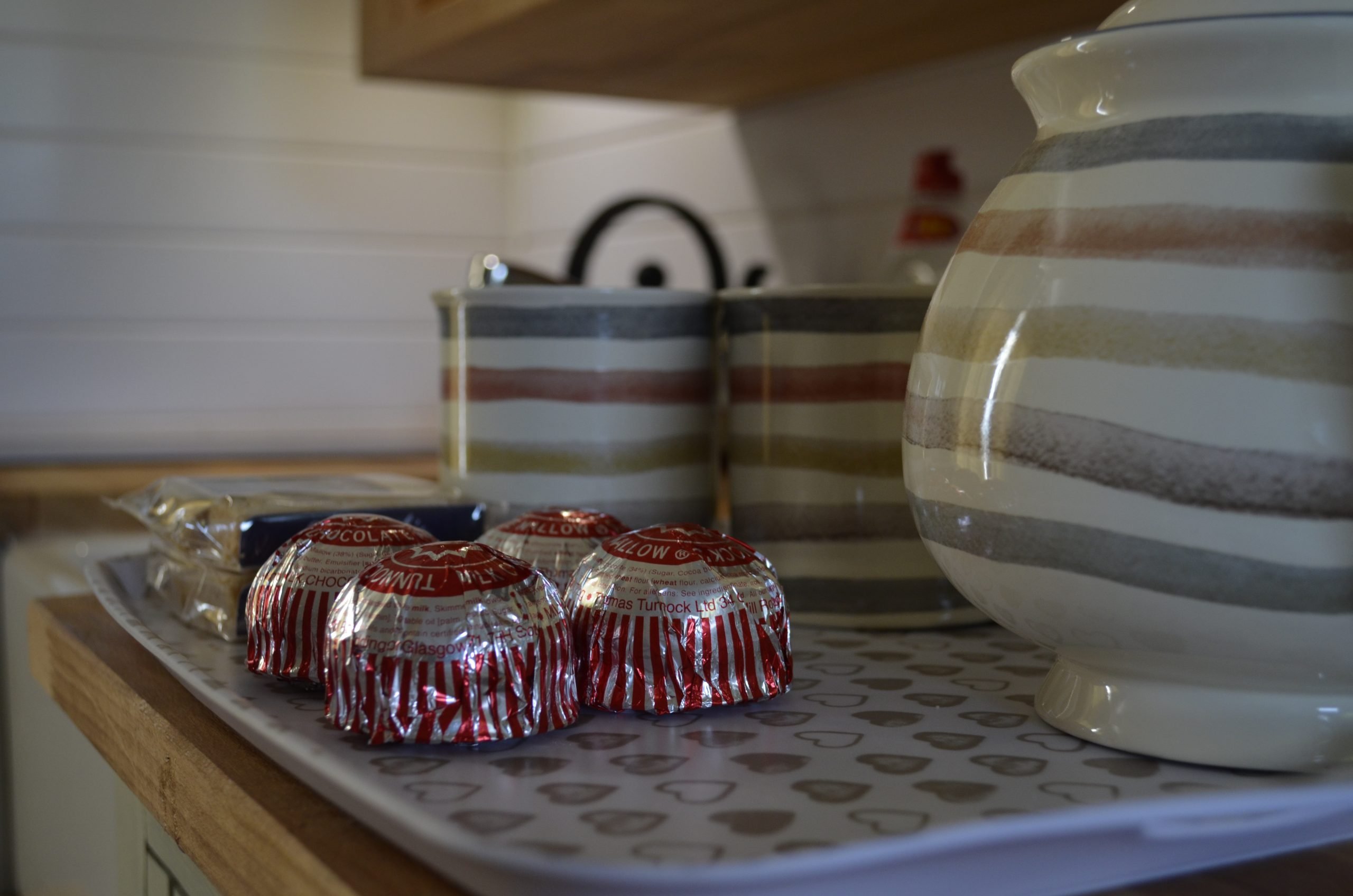 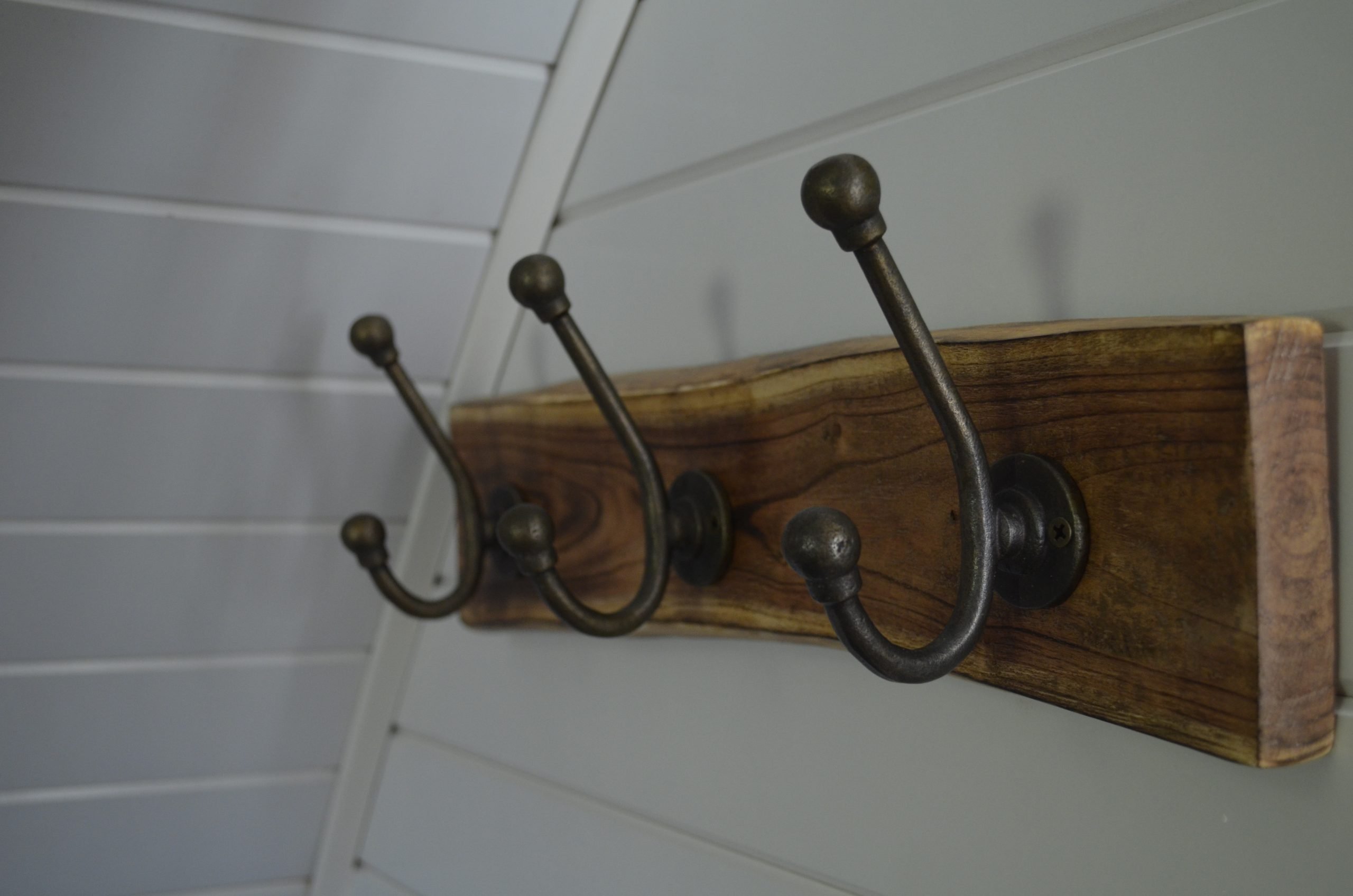 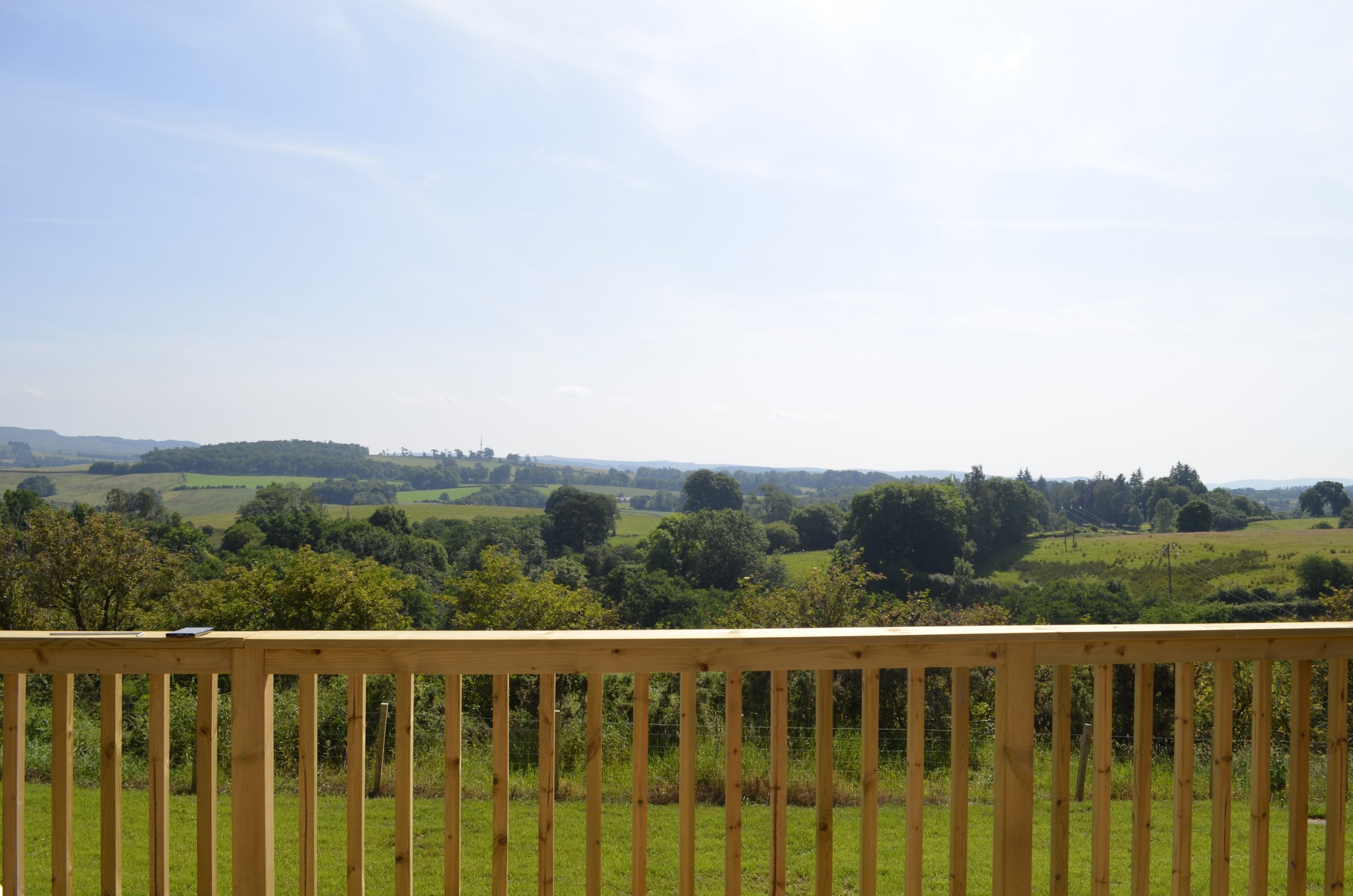 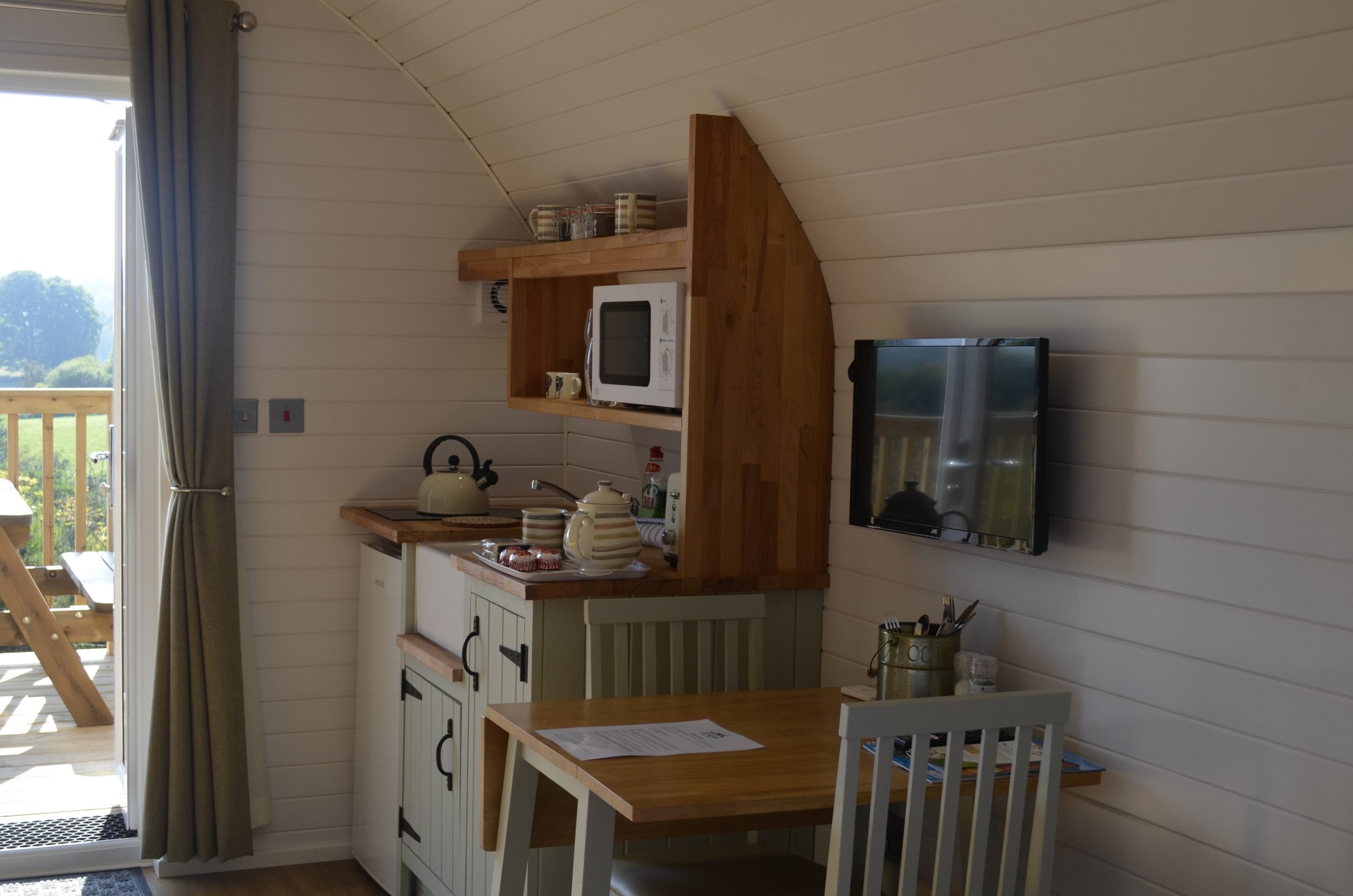 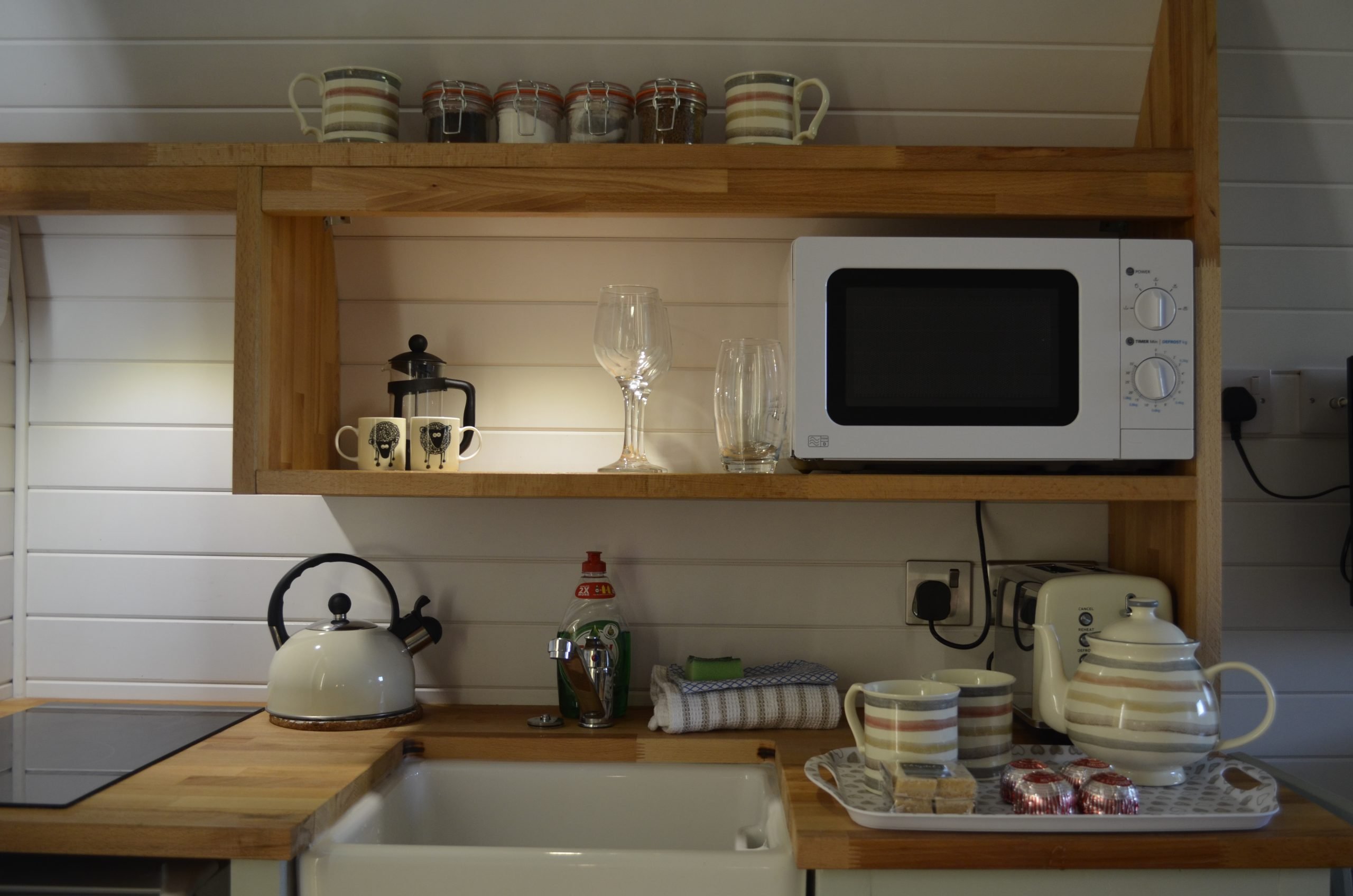 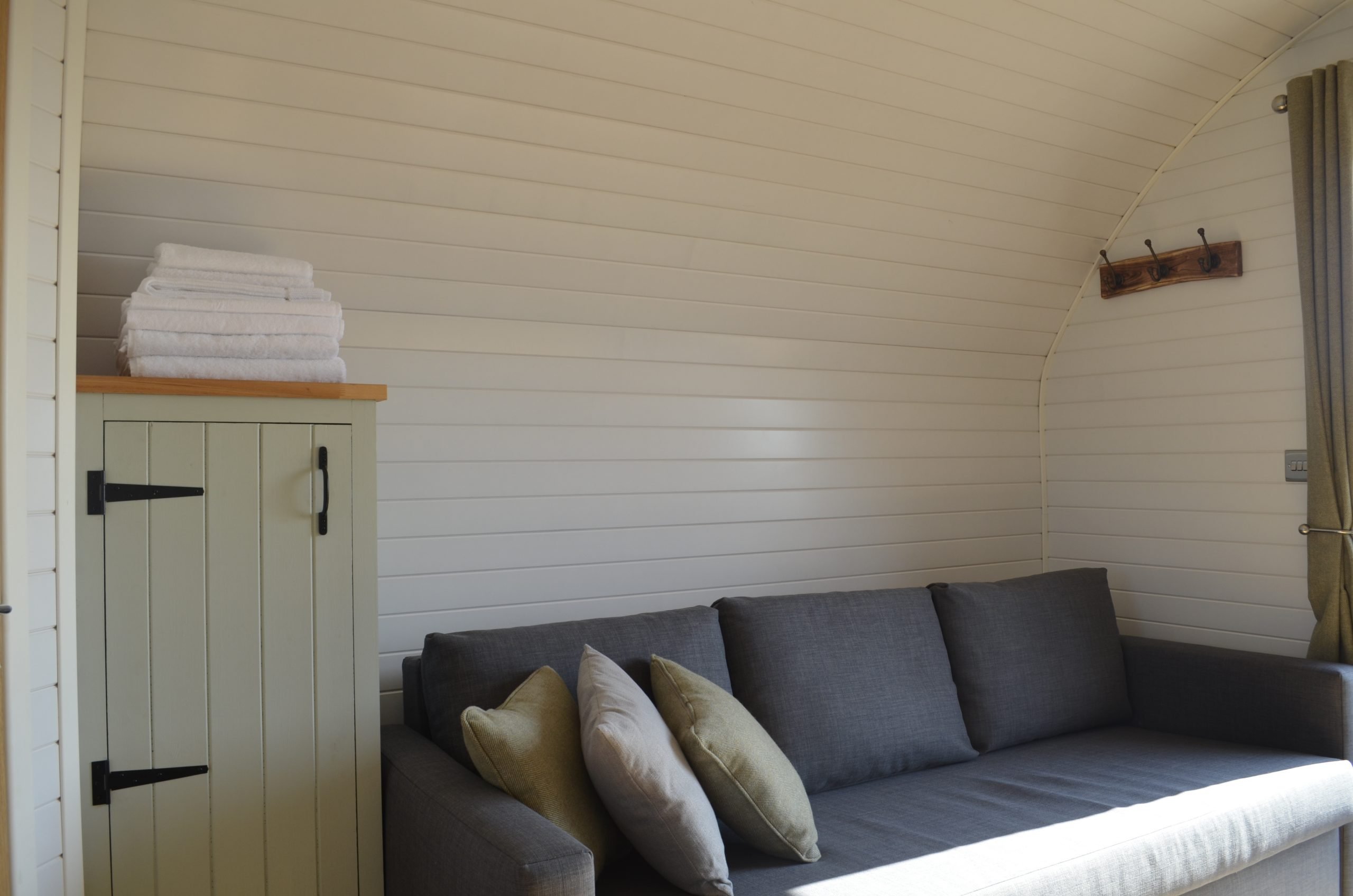 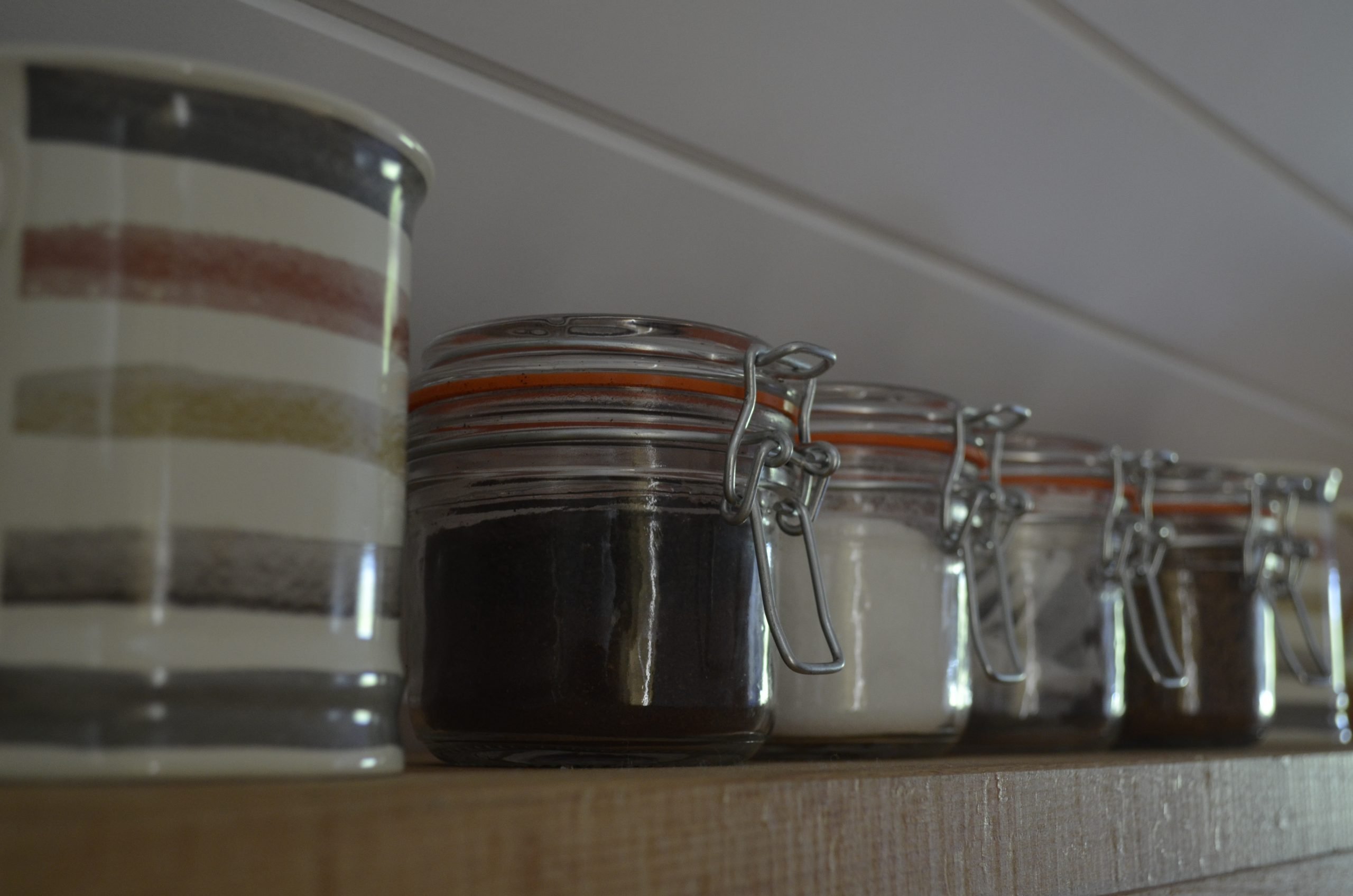 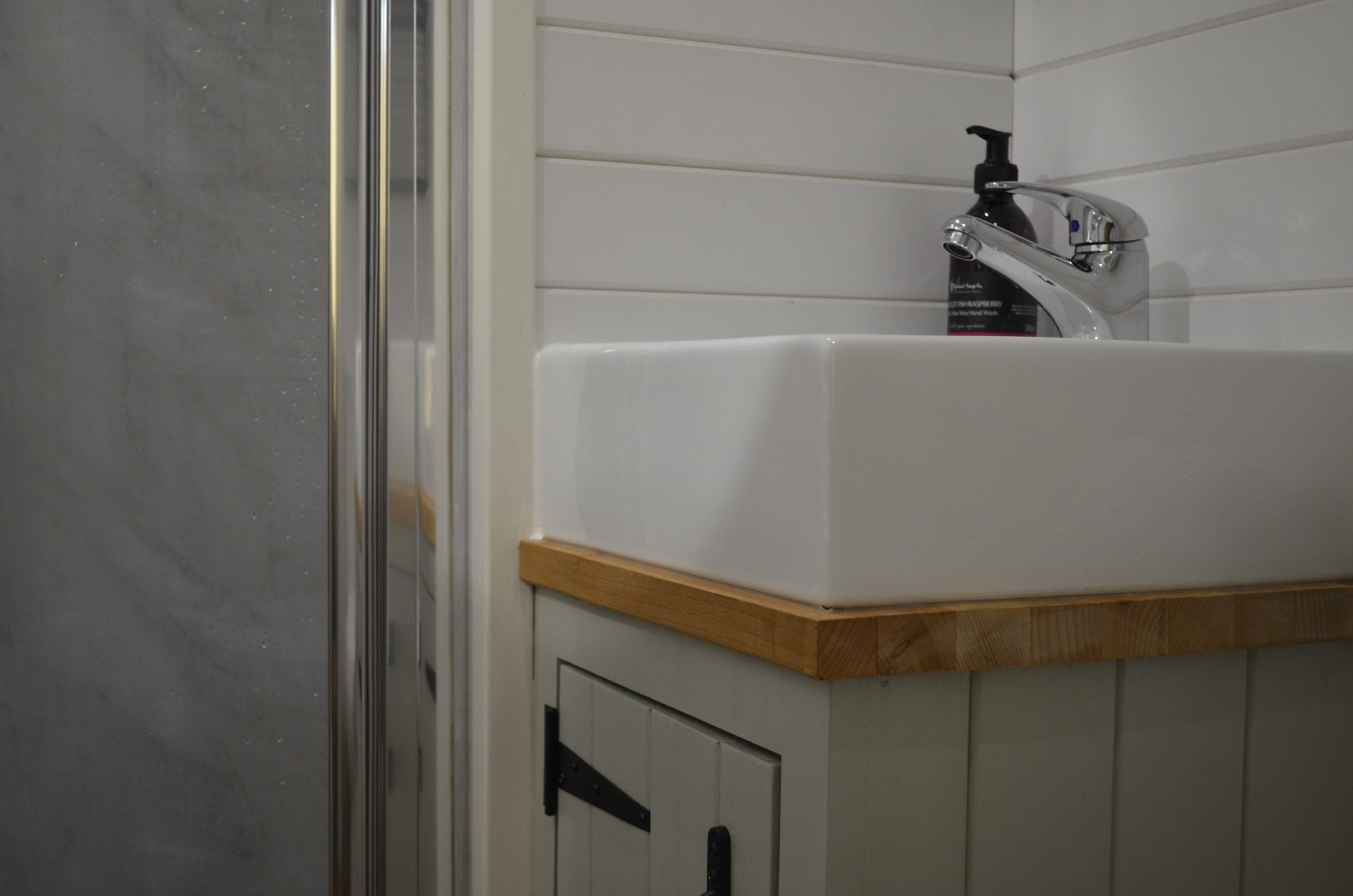 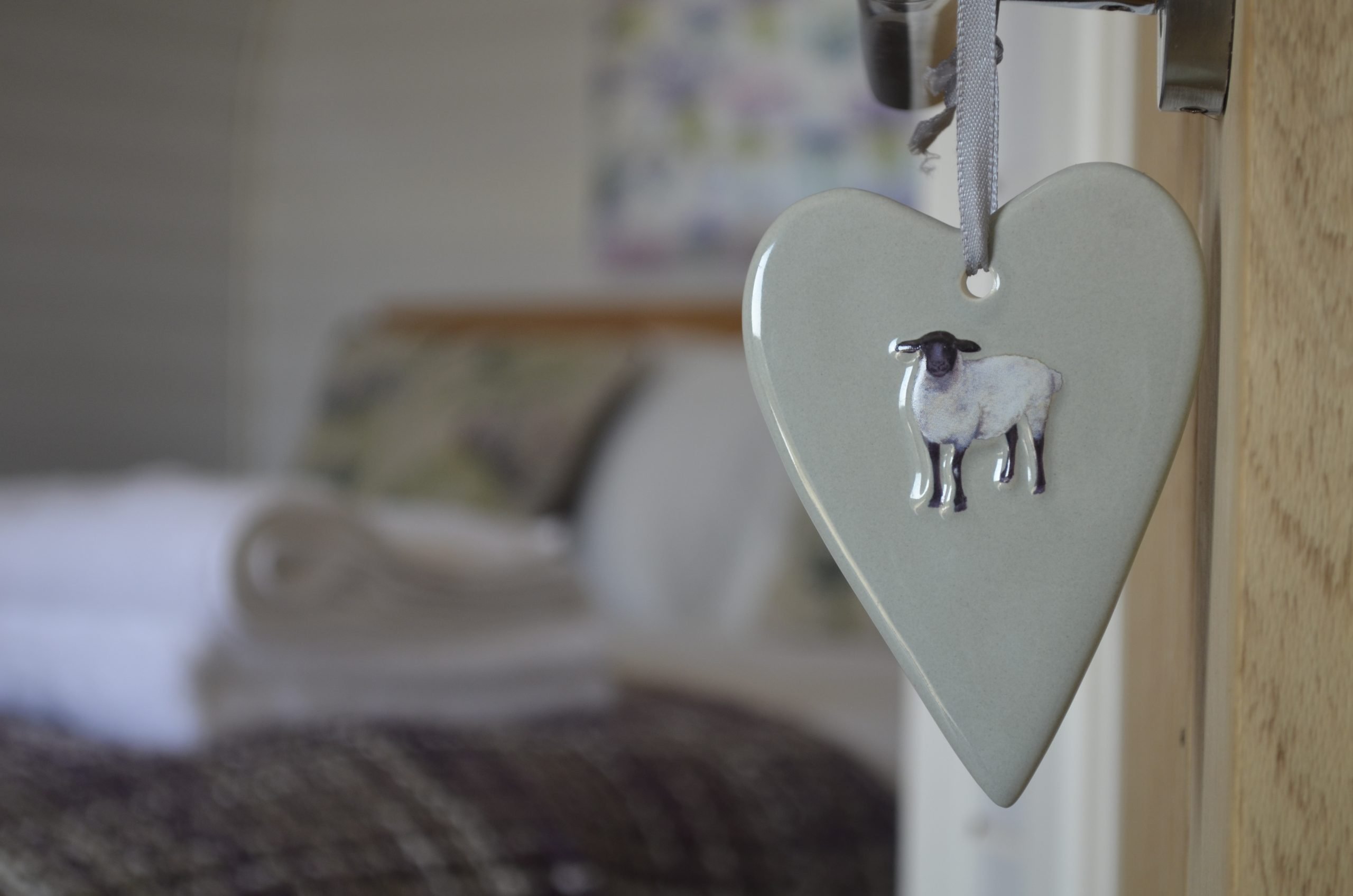 The But & Ben, Croftamie Coffee shop – Walking distance from the pods, perfect for coffee lunch or brunch.

The Clachan Inn, Drymen (claims to be oldest pub in Scotland, Est. 1734) – https://www.clachaninndrymen.co.uk

The Heft & The Hirsel are located near the end of the first leg of the West Highland Way, which runs from Milngavie in Glasgow to Fort William (154 km). So we’re an ideal one-night stop-off for walkers doing the route. We’ve teamed up with baggage transfer companies AMS Baggage Transfer, Travel-Lite, Baggage Transfer and Ginger Routes. Allowing walkers to have their bags dropped off and collected from our glamping pods if you’re walking the West Highland Way. To cater for walkers we’ve teamed up with Shellfield Farm to provide convenient farm2fork ready meals which can be heated up in your pod. Shellfield Farm offer a variety of meals which are made using high quality locally sourced ingredients. To order your meals contact us after booking your accommodation and we can email you an order form.

Things to do around Lands of Drumhead

The farm is within the Loch Lomond and Trossachs National Park and only a short distance from many fabulous walking routes. We’re located near the end of the first leg of the West Highland Way, which runs from Milngavie in Glasgow to Fort William (154 km). So we’re an ideal one-night stop-off for walkers doing the whole route, or for those staying on the farm longer, the proximity of this famous trail offers lots of shorter rambles. We’ve teamed up with baggage transfer companies AMS Baggage Transfer, Travel-Lite, Baggage Transfer and Ginger Routes so that you can have your bags dropped off and collected from our glamping pods if you’re walking the West Highland Way. We’re also near the John Muir Way, which runs from Helensburgh in the West to Dunbar on the East Coast (215 km). The third trail we’re close to is the Rob Roy Way (128 km). Its start is at Drymen and it runs to Pitlochry in Perthshire along the old drove roads that early eighteenth century Scottish outlaw and folk hero Rob Roy MacGregor reputedly frequented as both cattle drover and cattle thief!

We’re well placed for cyclists as well with both the National Cycle Route 7 and the John Muir Way Cycle Route on our doorstep. When it comes to hills (or munros) you’ll be spoilt for choice. A world-class view at the top of Conic Hill (361 metres) is reached after a short steep climb. Iconic Ben Lomond (974 m), Scotland’s most southerly munro, is a short drive away. Dumgoyne (427 m) is a prominent, rounded volcanic plug on the edge of the Campsie Fells offering panoramic views. The hill is also the source of the water that goes into the making of whisky at nearby Glengoyne Distillery. This picture-card distillery is renowned for having the most informative and entertaining tour in the industry. It’s also unique in that it produces a Highland style malt in the Lowlands. You might want to take a bottle back to sample on your deck as you watch the sun set.

As well as the above the area affords many golfing and fishing opportunities. An architectural gem on our doorstep is Charles Rennie Mackintosh’s Hill House at Helensburgh, a half hour drive away. And historic Stirling Castle is a half hour’s drive in the opposite direction. Glasgow is just down the road and for those staying a bit longer a day out to Edinburgh is very doable at an hour and a half away. Nearer to base are the local attractions of the Salmon Leap, at the Pots of Gartness and the Devil’s Pulpit. You’ll find further information in your pod!