Situated within the Loch Lomond and the Trossachs National Park, Inveruglas is one of the few remaining hill sheep farms at the north end of Loch Lomond. The Gaelic name means ‘mouth of the black river. The traditional farm steading sits on the loch side of the A82, yet the 4,600 acres of farmland includes ground rising to over 3000ft, with much of it being part of the Arrochar Alps. The rugged peaks of two munros are on our land: Ben Vane (Middle hill) (915 m/3000ft) and Ben Vorlich (Hill of the bay) (943m/3093 ft). Our sheep also graze Beinn Ime (Butter mountain) which rises to 1011m/3317 ft. Nestled in-between Ben Vane and Ben Vorlich is Loch Sloy which feeds the Sloy hydro scheme. The dam makes for a good excursion for visitors. Our beautifully renovated stable cottage makes the perfect base for a farm stay with lots of munro bagging opportunities.

The Glen Loin loop, the Three Lochs Way and the Cowl Way all pass through the farm. The hills are extremely popular for munro baggers. Inveruglas Isle – out on the Loch – was purchased along with the house. On it sits Inveruglas Castle, which was a principal stronghold of Clan McFarlane till it was partially destroyed by Oliver Cromwell’s men. The castle ruins are still very evident on the island today.

A flock of 1,200 Scottish blackface ewes graze the natural vegetation that exists on the open hill ground. The ewes are ‘hefted’ which means they are born and stay on the same area of the hill all their life. We round them up three times a year. This is called ‘gathering’ and we do it on foot with dogs, as the ground is not suitable for quad bikes or other vehicles. The sheep are gathered in March for pre lambing treatments, July for clipping, and September for lamb sales. Traditional shepherding plays a key part in the farm work at Inveruglas.

We also have a small herd of 30 native bred cows at Inveruglas, which are mainly shorthorn and highland crosses. They graze on the hill during the summer months. They have the run of the open hill but tend to stick to the lower slopes.

Near the village of Drymen 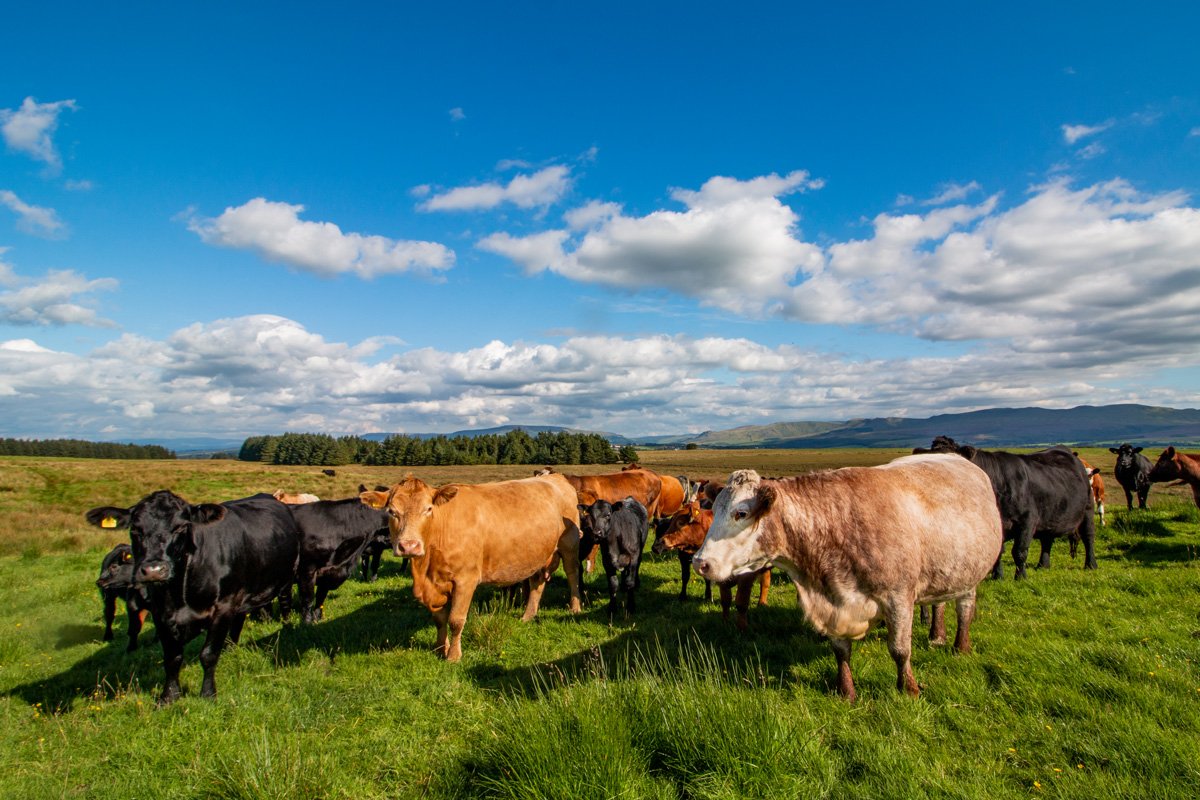 Blairfad Farm (meaning grassy plain) is situated just outside Loch Lomond and the Trossachs National Park, near the village Drymen. It’s also just below the Highland Boundary Faultline making it a Lowland Farm. Its moor ground extends out to the old Drymen to Gartmore Road which links to the start of the Rob Roy Way. Created in 2002, this long distance walk (128 km) to Pitlochry in Perthshire passes through country associated with the early eighteenth century Scottish outlaw and folk hero Rob Roy MacGregor. He both drove cattle and stole cattle!

On a good day, from the moor you can see along the Carse of Stirling, all the way to the Wallace Monument and Stirling Castle. Red deer, living in the surrounding forestry, graze the moor under the cover of darkness and are often spotted at dawn and dusk on the farm. The Loch Katrine to Glasgow water supply passes thorough the farm under ground and is marked by stone monuments a mile apart.

The 670-acre farm comprises of in by fields as well as moorland. In by fields are those with permanent grass, which is never cropped. An old dry stone dyke separates the fields from the moorland. Blairfad currently runs a flock 500 breeding ewes. Half of the flock are Scottish Blackface, which were bred at Inveruglas and come to Blairfad for an easier life in their later years. The other half of the flock are predominantly Scotch Mules, a cross breed where the mother is a Blackface ewe and the father traditionally a Bluefaced Leicester tup. 70 breeding cows, which are mostly native bred – Shorthorn and Aberdeen Angus crosses – graze the moor in the summer months. 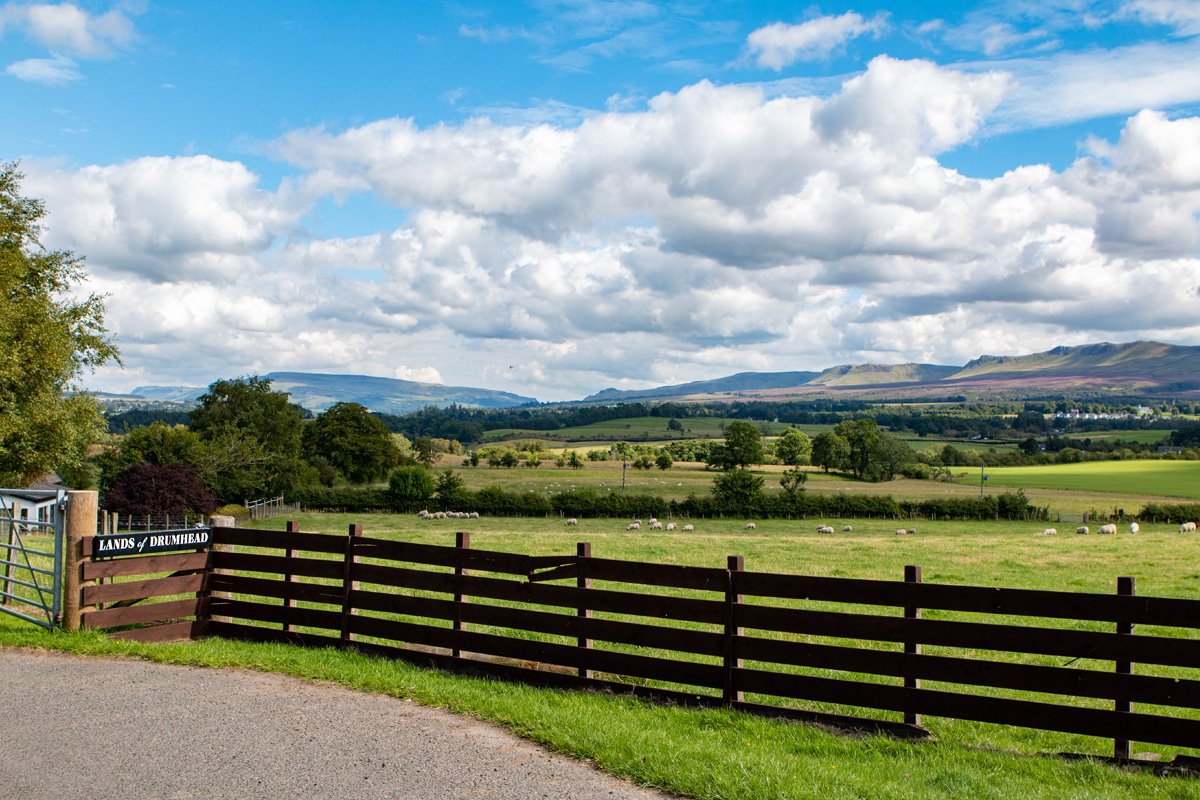 At 305 acres, Lands of Drumhead is the smallest of our three farms. Like Blairfad it is below the Highland Boundary Faultline and is situated on the boundary of the Loch Lomond and the Trossachs National Park, near Gartness hamlet in the Endrick valley. From the farmhouse there are brilliant views of the Campsie Fells including Dumgoyne and The Earl’s Seat from where the famous Glengoyne Distillery gets its water. The West Highland Way, the popular long-distance walking route from Milngavie (Glasgow) to Fort William, runs through the land that we farm. This section of the West Highland Way (total length 154 km) is also part of the National Cycle Route 7 and John Muir Way Cycle Route. Our luxury glamping pods are ideally situated to accommodate walkers and cyclists exploring these routes as well as tourists and holidaymakers.

We run a flock of 500 ewes at Lands of Drumhead. We have 50 Blackface sheep that produce tups/rams for breeding at our hill farm Inveruglas, 33 miles away. We have 375 Texel cross ewes and gimmers (ewes in their first year). We also rear 75 Scotch Mule gimmers that are destined for breeding at Blairfad, which is two miles away. A herd of 80 cows including Aberdeen Angus Shorthorn crosses graze the fields.

Our pre-ordered produce can be collected from fridges at Lands of Drumhead.